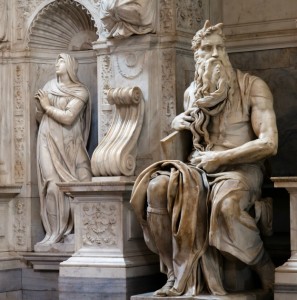 The coveted commission of his own splendid mausoleum by Julius II turned into an utter tragedy for Michelangelo, thanks to the continuous interruptions and endless modifications to which the original design was subject. Michelangelo threw himself into the project with great enthusiasm, following the first plan. This envisaged a mausoleum of three storeys decorated with forty statues in marble, and bronze reliefs; the Moses was to form a pendant to the statue of Saint Paul, both being symbols of the mystery of God’s revelation. Having spent a considerable time on producing numerous drawings and studies, as well as choosing the marbles in Carrara, the sculptor was forced to abandon the project and concentrate firstly on the work in Saint Peter’s, to which Julius II apparently gave precedence, and, after that, on the ceiling of the Sistine Chapel. When the Pope died in 1513, Michelangelo returned to the project, although it had been very much reduced and modified; the mausoleum was no longer free-standing but attached to the walls and it had fewer statues. The artist undertook to finish this second project within seven years, but, in fact, thirty years would pass before the end product of the tomb in San Pietro in Vincoli was achieved, work on this having only been resumed in 1532 after a long interruption. Between 1513 and 1515 Michelangelo worked on the statues of the first two Prisoners (today in the Louvre), which should have acted as telamons to hold up the architrave beside the two figures of Victories, and that of Moses. The latter undoubtedly represents one of the summits of Michelangelo’s art in terms of expressiveness. The rough, nervy quality of the marble surfaces reflects the interior strength, as well as the apprehension, of the prophet of Hebrew law, symbol of the human condition. Hints of antique culture — from the Torso of the Belvedere to the figures of ancient river divinities — blend with echoes from 15th century sculpture, particularly that of Donatello. The figure is seated, the face contracted in concentration and turned towards the left; the right foot rests on the ground, while the left leg is raised with only the point of the foot resting on the base. The biblical figure has a majestic, solemn air in spite of the pervasive feeling of dynamism and withheld energy.