Individual excursion in Rome with private guide and car

In 1466 Paul 11 moved two huge Terme di Caracalla granite basins from the original platea nova to Piazza Farnese. Thus the reigning pontiff implemented the first phase in the evolution of Piazza Venezia, which, as the monumental figurehead of the Corso, was taking shape in relation to the gradual building of Palazzo Venezia. It represented the first big urban change in Renaissance Rome and became the theatrical arrival point of the famous race of the Barberi which, in carnival season, started in Piazza del Popolo and wound its way along the Corso with a festive crowd and the richest nobility looking on. A dense urban network of medieval origin linked it to the Capitoline Hill and an area of crowded fifteenth and sixteenth buildings joined it to the Monti rione beyond the Imperial Forums. 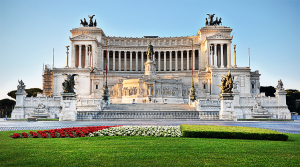 When the decision was taken in 1882 to erect the monument to Vittorio Emanuele II as a backdrop to the Corso, in the lee of the Campidoglio, substantial changes had to be made to the whole area, which had hitherto ended in the piazza. In 1845 the latter had witnessed the first appearance of a horse omnibus and gas lighting. The next step was the demolition of the buildings sheltered by the monument; this enlarged the piazza, which was extended even further after the demolition of the 16th century Palazzo Torlonia, opposite Palazzo Venezia. Next the Assicurazioni Generali building was constructed, in the style of the Pauline complex; this was placed further back in the piazza. Palazzo Venezia, which had already been commissioned by Cardinal Pietro Barbo as a prestigious private residence in about 1464, was subjected to considerable changes when Paul II was elected pontiff, to make it fit for a «papal palace)). As a residence of the ambassadors of the Venetian Republic in 1564, the palazzo underwent further changes when it passed first of all to the Hapsburg Empire and then, in the Napoleonic period, to the Italic Kingdom, when it became home to the Academia di Belle Arti directed by Antonio Canova. It was to undergo further changes when, between 1929 and 1943, it was home to the head of government and the Great Council of fascism. Meanwhile the outlook of the piazza had evolved in 1911 with the inauguration of the central Monument and the definitive layout of the area. When the axes of Via del Mare and Via dei Fori Imperiali were opened during the twenty years of fascism, the piazza, which was proclaimed the Forum of Italy, was confirmed in its role as both symbolic and geographical centre of the city

PRIVATE CAR TOURS IN ROME and AROUND ROME – RUSRIM.COM
Small group tours in minivans ensuring the highest level of comfort. Our vehicles are fully equipped with all the options required for  long trips, including air conditioning.
An English speaking private guide will be at your disposal for the whole day and will arrange the most satisfactory tour with you.