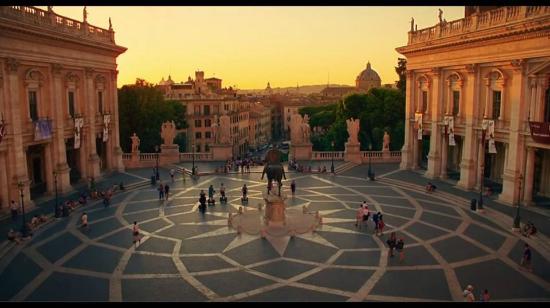 The Piazza del Campidoglio, with the long flight of steps leading up to it, is both the political and physical heart of the city. It was designed in its monumental setting by Michelangelo in 1536, under the patronage of Paul III Farnese. It arguably represents the most perfect translation of the concept of the piazza as an autonomous urban space in 16th century culture. In a masterly reinterpretation of the classic concept of the piazza, Michelangelo reversed the outlook, which had until then been oriented towards the Roman Forum, placing the statue of Marcus Aurelius in the middle to face Saint Peter’s Basilica. As background, he devised the complete rebuilding of the medieval Palazzo Senatorio, which rose above the ruins of the former Tabularium, and the side wings, made up of the Palazzo dei Conservatori and the Palazzo Nuovo.

The latter were completed according to the artist’s plans respectively in 1568 and 1655. Uprooted and set obliquely, they endow the piazza with a greater sense of space, and enhance the perspective and theatricality. The geometric star design of the paving, which was implemented in 1940 by Antonio Munoz based on the plans left by Buonarroti, also emphasises the centrifugal, dynamic dimension of the whole. The robust and imposing plasticity of the architecture adds to the sober stateliness of this area. The facade of Palazzo Senatorio was adapted from the Michelangelesque plan by Giacomo Della Porta and Girolamo Rainaldi, with its entrance facing the piazza, characteristic double flights of steps, stucco facing and row of gigantic Corinthian pilaster strips. The balustrade looking out over the city, with its monumental Dioscuri, was also conceived to complement the piazza, and was modified by Della Porta in 1585.