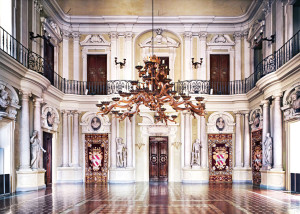 Formerly Riario Palace (1511-18) and then Palace of Christina of Swe-den (1659-89), Corsini Palace now hosts the Corsini Gallery and Library as well as the Lincean Academy (The National Academy of Science). The picture gallery remains in its historical location with-in the Palace of Via della Lungara which faces the Villa Farnesina. This palace was acquired in 1736 upon the arrival of the Florentine family to Rome soon after the election of Pope Clement XII (1730-40). The main collection is on the first floor of the majestic palace that archi-tect Ferdinando Fuga designed for Car-dinal Neri and his brother, Bartolomeo Corsini. It was based on the French mod-el of the Palace of Versailles with anoth-er wing (1736-1753) which doubled the facade to the right of the entrance and a central double-banistered staircase leading into a connected garden. The lavish interior of the building, the gathering place of erudite scholarijike Neri Corsini himself, the family librar-ian – Giovanni Gaetano Bottari – and the Quirini academicians, both faces and reflects the ancient magnificence of the Italian garden with its Scalinata delle Undici Fontane designed by Fuga (1741-1744). The gardens which included a “Teatro di verzura” (a fashionable 18th centu-ry open theatre with the use of hedges and bushes as theatre-props and a raised lawn replacing a stage), encompassed woods, labyrinths, paths, fountains, quaint waterfalls and antique sculp-tures. These have now become the bo-tanical gardens belonging to the Facolta di Biologia dell’Universita di Roma “La Sapienza”. The gardens together with the Palace were granted to the State in 1883 by Prince Tommaso Corsini. 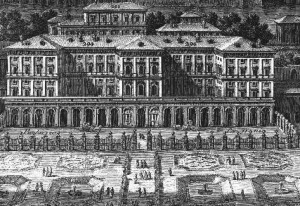 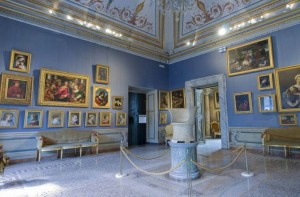 The Corsini picture gallery, which has remained unchanged since the 18th centu-ry, represents the most important example of Fideicommissum. The institution prohib-ited heirs from alienating works of art be-longing to the family and thus the entire collection was preserved intact. The collec-tion is also rare evidence of the phenom-enon of “collezionismo” between the 17th and 18th centuries, but the uniqueness of its history stems from its residence within the Renaissance Palazzo Riario, where lat-er Christina of Sweden chose a splendid-ly ornate chamber as her private “alcove”. The Corsini collection was donated to the State in 1883 and formed the main collection of the Galleria Nazionale d’Arte Antica which was founded for the occa-sion. Displayed on the main floor, the pic-ture gallery is composed of over 300 paint-ings, numerous sculptures and precious ornaments set within the elegant decora-tion lining walls and doors. 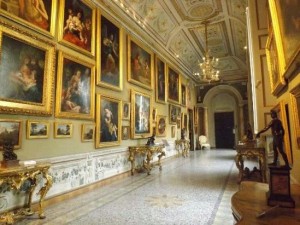 The original collection is mainly com-prised of works bought by the senior Car-dinal Neri Corsini in the 17th century, of the major property of Cardinal Lorenzo, later Pope Clemente XII (1730-1740), and his grandchildren, Bartolomeo and Neri junior (1685-1770). It is particularly characterized by the cultural tastes of the latter who emerged from a Florentine background and was in-fluenced by the cosmopolitan climate of the European courts. Cardinal Neri Jr. con-tributed to the cultural movement of the times by widening artistic circles through close relations with art-merchants and art-ists like R Anesi, A. Masucci, G. P. Pan-nini and G. Van Witte! — testified by the existence of their works in the gallery. This was magnified by the friendship he culti-vated with classicist art-critic Giovanni Gaetano Bottari. 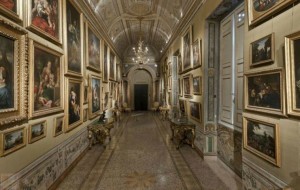 The new exhibition aspires to display the historical Corsini picture gallery at the height of its splendor. It was document-ed in the inventory of 1771 which gave a comprehensive description of the works in five rooms (Antechamber, First Gal-lery, Cardinal Gallery, Fireplace Chamber and Alcova Room), and in the inventory of 1784 that described the other rooms of the apartment at the time of Cardinal Andrea Corsini. The former Chamber of Hercu-les and Lica, having taken its name from Canova’s sculpture exhibited there in 1907, is now reserved for museum events and is not part of the current exhibit.

We raccomand you the original VIDEO of the roman churches Music by A. Karanov