The life of the Artist. Francesco Castelli, who, from 1628 signed himself as Borromini – from “Bromino” or “Brumino”, a nickname used by his fami- ly and coming from the name of an ancient locality or from the ties with the Borromaos – was born in Bissone, near Lugano on the 27th September 1599. He was the first-born of four children and was the son of art. Both the paternal family and that of the mother, a Gar-vo, had in their lines, architects, engineers, stonecutters and sculp-tors. It is no wonder since there were numerous families of stonecut-ters and architects coming from the Ticino Canton that were active all over Europe. Francesco left the town at the age of only nine, in 1608, to go to Milan “to learn the art of stone cutter”. After his ap-prenticeship, he took part, among other things, in the building site for the Cathedral. In 1619, “he got in with some young people of his own age”, he went to Roma where he was guest of his cousin Leone Garvo, who is the acquired nephew of Carlo Maderno. It was the latter, noted architect, who introduced Borromini to the St. Peter’s building site. Again, it was Maderno, having noticed the passion with which the young Francesco carried out the assignments given to him, “gave him work and trace clean designs”, a task that Borromini took to heart: “The designs were his children”. After the accidental death of his cousin on the St. Peter’s building site, Francesco acquired some goods from the unfortunate relative (marble and work tools) and replaced him in society with another two Ticino tablets. Leone Garvo, probably, lived in the same house where Borromini could have lived, in Via dell’Ag-nello, 3, not far from the church of San Giovanni dei Fiorentini. With Maderno, Borromini also worked on the building sites of the church of Sant’Andrea delle Valle (decorations of the lantern) and the Bar-berini Palace, /hen under Gianlorenzo Bernini. With the latter, he col-laborated in the construction of the canopy in the Vatican basilica (1631- 33). The great rivalry between the two artists had already be-gun. On one side, Borromini, saturnine and melancholic with great moral sensitivity proud and intransigent in his profession so much as to be subject to neurosis.

On the other, Bernini, astute and ca-sual in moving among the high papal hierarchies of Roma. Under Ur-ban VIII, the architect from Ticino had only one official commission, and what is more, under the indication of Bernini: the appointment as architect for the university La Sapienza (1632). The works for the university church, St. Ivo, began, nevertheless, only ten years later. 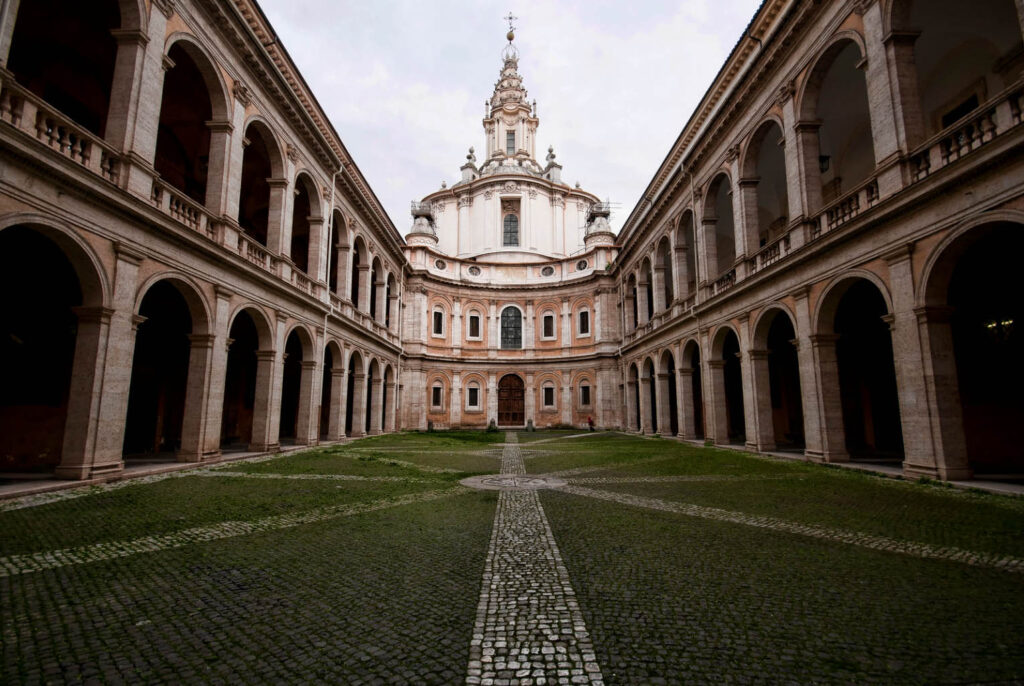 Between 1634 and 1641, he was oc-cupied with his first work as an inde-pendent architect. The church and convent of the Spanish Trinitari of St. Carlo alle Quattro Fontane. Evi-dently, the commissions from the re-ligious orders were more suited to Borromini, who in those years worked mainly for the Oratorians of St. Filippo Neri (until 1650). The astonishing design for St. Carlino, impressed the Neapolitan Archbishop Ascanio Filomarino, who gave him the work on the altar in the chapel of the Annunciation in the church of the Apostle in Naples. In the Parthenopean city he also did the lost decoration for the apse and ciborium of St. Maria a Cappella Nuova (1639 – 42). He did not abandon the craft of stonecutter because he designed and made the Merlini monument in St. Maria Maggiore in 1642. 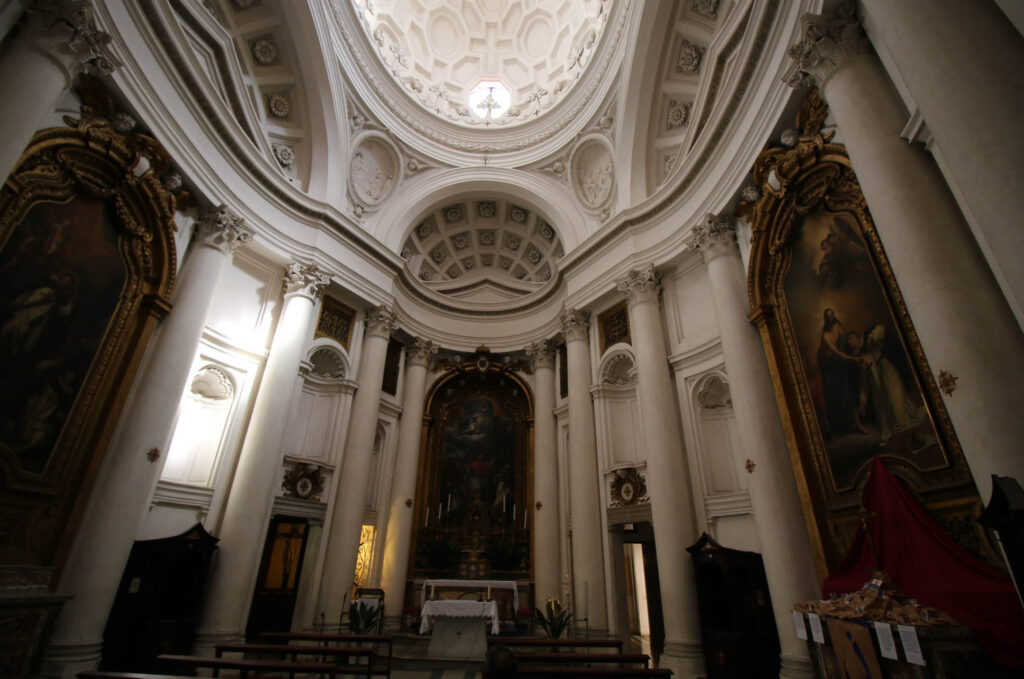 After the election of Pope Innocent X, Pamphilj, a period of great suc-cess began for Borromini, to the detriment of Bernini who had tem-porarily fallen into disgrace. He worked on the palace in Piazza Navona and on the church of St. Agnes for the papal family, he planned the hunting lodge for the Pamphilj villa near the St. Pancras gate and worked at St. Martino al Cimino (the Roman gate, perhaps the design for the city wall and the winding stairway in the family palace). On the commission of Innocent X, he took charge of the restoration of the basilica of San Giovanni in Laterano, for the Jubilee of 1650. During the same period, he worked on the church and convent of Santa Maria dei Sette Dolori and also for the noble families of the Spada’s, the Carpegna’s and the Falconieri’s. 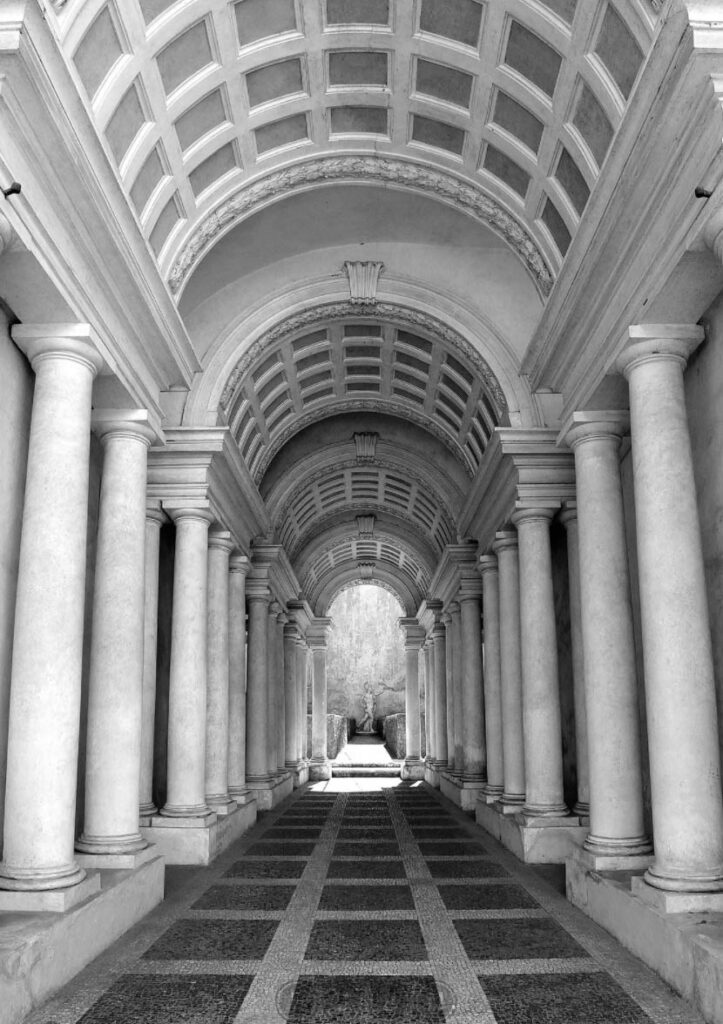