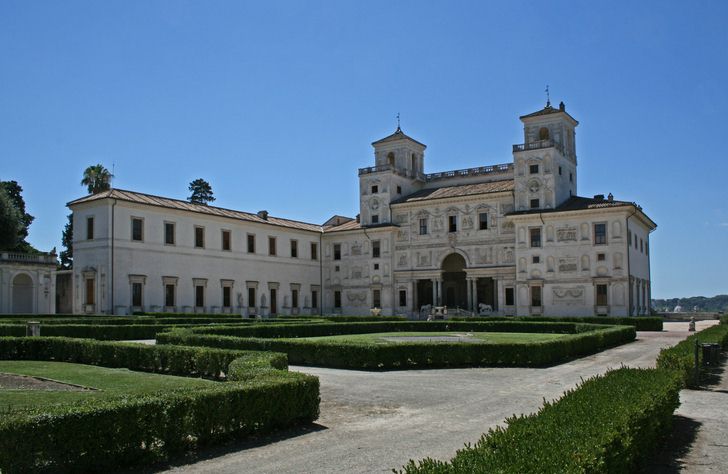 The Villa Medici and its big park were created at the end of the 16th century where, in antiquity, there had been the gardens of Lucullus, who was celebrated in Larin literature for his passion For gastronomy and the art of living. Cardinal Ricci acquired the land in 1564, had a palazzo built on it by the Florentine architect Nanni di Baccio Bigio and was responsible for the firsr signiﬁcant phase of works. In 1576 Cardinal Ferdinando de’ Medici, the great collecror and patron, bought the estate and entrusted the Florentine architect Bartolomeo Ammannati with a very ambitious project. Ferdinando de’ Medici, a lover ofantiquity, conceived the villa as a museum, with a reﬁned gallenr-antiquarium. The garden was also planned in a theatrical spirit, on the lines of bOtanical gardens created by the Medici family in Pisa and Florence. Many rare plants were to be found in it. together with numerous antiquities. The palazzo was only to recover its status as a haven for the arts in the 19th century. when it became the seat of the Académie Francaise in Rome. Below the villa is the expanse of one of the most picturesque piazzas in Rome, with the theatrical backdrop of the monumental 13th century ﬂight ofsreps of Trintita dei Monti leading down to the disrinctive Batcaccia fountain, which was the work of Pietro Bernini in 1629. The Piazza di Spagna, which forms a splendid background to the Via dei Condotti and is a real «icon» of the city, is one of the most monumental and theatrical urban complexes in Rome. From the 16th century onwards, the space between it and the nearby Via Margutta and Via Babuino was a meeting point for artisrs and writers, and the area was animated by antique shops, inns and elegant residential buildings. However it was between the seventeenth and eighteenth centuries that the piazza took on its present appearance, with the disrinctive «butteer shape, formed by two triangles with a common vertex. Having initially been called «alla Trinita», after the church which dominates it, it came to be
known as the Piazza di Spagna in reference to the Spanish ambassador’s residence there. 1629 was the year in which Pietro Bernini and his son Gian Lorenzo executed the Barcaccia Fountain. This was conceived to commemorate the ﬂooding of the Tiber in 1598, and its distinctive boat shape is an allusion to the Church being under the safe guidance of the Barberini. It reSts on the ground inside another elliptical-shaped basin, which  acts as the spatial pivot ofthe piazza, but it is the ‘ central Steps which make this one of the most famous settings of the city. Built by Francesco De Sanctis between 1723 and 1726 under the patronage of Innocent XIII, to resolve the difference in level between the Chiesa di Trinita dei Monti and the piazza below, the Spanish steps are based on the design of the port of Ripetta sul Tevere, which was built in 1704 by Alessandro Specchi and then destroyed. The daring solution is a confirmation of the theatrical bent oflate Baroque urban planning in the capital. It includes impressive balusnaded terraces embraced by two wings of steps, which, in an elegant Fan motif and alternating and curvilenear movement of converging and diverging ramps, merge to ﬂow down into the piazza below.