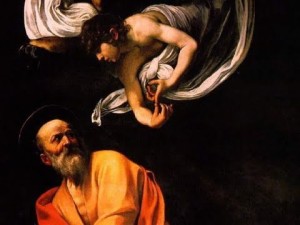 Thanks to the mediation of Cardinal Del Monte from the July of 1599 to that of 1600, Caravaggio painted the two side canvases for the chapel of Cardinal Contarelli in San Luigi dei Francesi, his first public commission. The Calling and Martyrdom of Saint Matthew were both demanding in terms of the depiction of a story in action and the numerous figures. The symbolic role of the light, coupled with the natural illumination of the chapel, lends unity to the whole. With these canvases Caravaggio brings contemporary reality into a sacred scene and into a church chapel for the first time. Characters dressed in the current style participate in the sacred event as they go about their daily life, intent on tavern games. The first canvas to be finished was the Calling. Caravaggio constructs the scene around the gesture of Christ, who points towards Matthew and whose hand position is mirrored by the latter’s. The two groups are unified by the shaft of light, whose origin is outside the field of vision, above the head of Jesus. The light is both divine and natural and also serves as an efficacious stylistic expedient to emphasise the evident contrast between the modern clothes of Matthew and his companions and the few divine attributes of the apostle, who is barefoot and wrapped in a large cloak of antique style. In the case of the Martyrdom, the focal point of the scene is the executioner, who is in the act of striking the martyr. The other characters are placed around the central figure, gradually going further back into the bare space which is the scene of the action. Caravaggio freezes the dramatic moment before the death by means of the light. This is concentrated on the naked body of the executioner poised to strike and on the angel who proffers the palm of martyrdom to the saint. Once it was placed on the altar of the chapel, the altarpiece of Saint Matthew and the Angel, which was done in three and a half months in 1602, was, according to Bellori 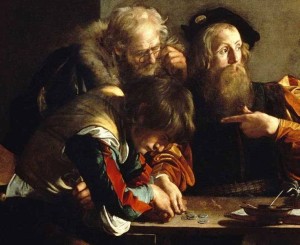 PRIVATE CAR TOURS IN ROME and AROUND ROME – RUSRIM.COM