Orbetello and its lagoon. ORBETELLO is principally distinguished by its strange location on a narrow isthmus in the middle of the Laguna di Orbetello. little in the place excites real attention, but it has become something of a resort, thanks to its being the gateway to the dramatic rocky out-crop of Monte Argentario. 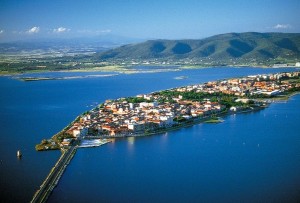 On summer weekends, it becomes a bottleneck, as cars full of tourists pile in to Porto Ercole and Porto San Stefano, the Argentario’s supposedly chic resorts. As well as seafront attractions, the Orbetello area offers much to naturalists, its lagoon boasting a nature reserve known as the Italian birdwatchers’ El Dorado. The train station is 4Icm away at Orbetello Scab, on the mainland edge of the lagoon, a prominent stop for trains on the Rome-Pisa line. There are connections for Siena and slow trains to smaller stations to the north and south. Connecting buses run from the station to the bus terminal just off Piazza della Repubblica, from here there are regular services to Grosseto, Porto Ercole and Porto San Stefano, as well as daily buses to Capalbio and Pitigliano. 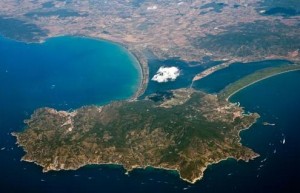 The Town Orbetello is an unassuming and pleasant place, gram’ with palm trees, the pastel-coloured remnants of Spanish walls, and a main street – the Corso Italia – thronged each evening with a particularly vigorous passeggista. It was probably Etruria’s leading port, though little evidence of its ancient past remains except fora few blocks of Etruscan wall underwater near the causeway. The Byzantines took advantage of its easily defended position, holding out longer here than anywhere else on the Tyrrhenian coast. Thereafter the papacy gained control, and did not relinquish it until 1559, when the Spanish established a military Presidio with Orbetello as its capital. The town’s last claim to fame was as the headquarters of Mussolini’s seaplane squadrons; the surviving aircraft hangar is one of Tuscany’s more bizarre architectural attractions. The Spanish fortifications are the town’s conspicuous feature, and a fine example of military architecture. The elegant arsenal, the PoWeriera de Guzman, houses a small archeological museum. Nearby, the dooms in Piazza della Repubblica appears promising with its lovely Gothic facade, only to disappoint with a grim Baroque interi-or. Orbetello’• lively street market is held on Saturdays.

The romantic colors of Orbetello – Tuscany 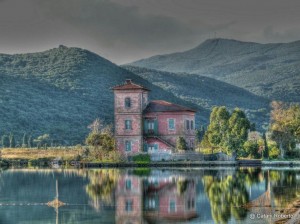 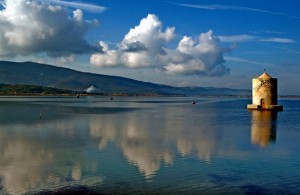