The Villa Doria Pamphili is a seventeenth-century villa with what is today the largest landscaped public park in Rome, Italy. It is located in the quarter of Monteverde, on the Gianicolo (or the Roman Janiculum), just outside the Porta San Pancrazio in the ancient walls of Rome where the ancient road of the Via Aurelia commences. 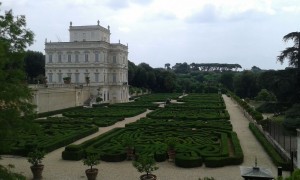 It began as a villa for the Pamphili  family and when the line died out in the eighteenth century, it passed to Prince Giovanni Andrea IV Doria from which time it has been known as the Villa Doria Pamphili.

The nucleus of the villa property, the Villa Vecchia or ‘old villa’, already existed before 1630, when it was bought by Pamfilio Pamfili, who had married the heiress Olimpia Maidalchini, to enjoy as a suburban villa. Thereafter he set about buying up neighbouring vineyards to accumulate a much larger holding, which was often known as the Bel Respiro or ‘beautiful breath’ as it stood on high ground, above the malarial areas of Rome, and offered spectacular views which were a desirable feature of Baroque villa settings.