Of august gold-wreathed and beautiful
Aphrodite I shall sing to whose domain
belong the battlements of all sea-loved
Cyprus where, blown by the moist breath
of Zephyros, she was carried over the
waves of the resounding sea on soft foam.
The gold-filleted Horae happily welcomed
her and clothed her with heavenly raiment

is a painting by Sandro Botticelli generally thought to have been painted in the mid 1480s. It has long been suggested that Botticelli was commissioned to paint the work by the Medici family of Florence, specifically Lorenzo di Pierfrancesco de’ Medici under the influence of his cousin Lorenzo de’ Medici, close patron to Botticelli.

For Plato – and so for the members of the Florentine Platonic Academy – Venus had two aspects: she was an earthly goddess who aroused humans to physical love or she was a heavenly goddess who inspired intellectual love in them. Plato further argued that contemplation of physical beauty allowed the mind to better understand spiritual beauty. So, looking at Venus, the most beautiful of goddesses, might at first raise a physical response in viewers which then lifted their minds towards the godly. A Neoplatonic reading of Botticelli’s Birth of Venus suggests that 15th-century viewers would have looked at the painting and felt their minds lifted to the realm of divine love.

More recently, questions have arisen about Neoplatonism as the dominant intellectual system of late 15th-century Florence, and scholars have indicated that there might be other ways to interpret Botticelli’s mythological paintings. In particular, both Primavera and Birth of Venus have been seen as wedding paintings that suggest appropriate behaviors for brides and grooms.

Yet another interpretation of the Birth of Venus (whose title derives from Vasari but whose action perhaps better represents the Arrival of Venus) is provided here by its author, Charles R. Mack. This interpretation has not been adopted by Renaissance art historians in general, and it remains problematic, since it depends on the painting being commissioned by the Medici, yet the work is not documented in Medici hands before 1550. Mack sees the painting as an allegory extolling the virtues of Lorenzo de’ Medici.  According to his reading of the painting, the scene was inspired by the text in a Homeric hymn published in Florence in 1488 by the Greek refugee Demetrios Chalkokondyles:

Tuscany – The land of italian art 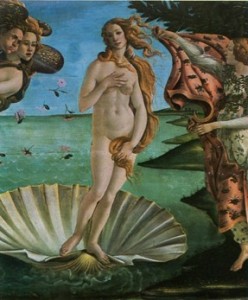 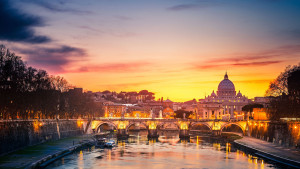