Individual evening and night private tour in Rome Eur 60 / h Max 6 pax – English local guide with car and driver in Rome You will be picked from your hotel or Fiumicino – Ciampino Rome airport. Discount for the full night private tours.

Private tours of main squares, fountains, churches and museums of Rome selected for you. The tour includes short walks on foot for visits of monuments and stops for taking pictures and a lunch or a coffee break.The sequence of monuments and their choice will display a historical and artistic evolution of the Eternal City. As well as a perfect overview of ​​the different types of styles in the arts of architecture and sculpture and painting. Many monuments, private art collections, entrances to palaces are offered exclusively by RUSRIM. tour guides. During the guided tour you can have a break for tasting of local food preferred by Roman elite. In summer the most popular organic ice cream shop in Rome is a place to drop in.

THE TREVI FOUNTAIN by NIGHT 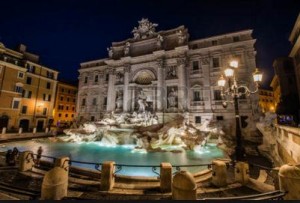 Fontana di Trevi  1629 designed by Italian architect Nicola The aqueduct served the hot Baths of Agrippa, and Rome, for over four hundred years. Salvi and completed by Pietro Bracci. The Fontana di Trevi, a happy and successful marriage of classicism and baroque, was planned as an exhibition of the Acqua Vergine by Nicola Salvi under the patronage of Clement XII. Pope Urban VIII Barberini had already instructed Gian Lorenzo Bernini to «transform» the piazza and the fountain. but the project was never carried out. Set along one side of Palazzo Poli, the Fountain, which was made by Nicola Salvi between 1732 and 1763, represents an original and imaginative fusion, in the Berninian Style, of architecture, sculpture and the natural elements which contribute to the Fountain’s unique character. The theme of the sculpture is the sea. The design is dominated by a charior in the form of a shell in which the great statue of Neptune by Pietro Bracci stands, ﬂanked in the side niches by Health and Plenty, the works of Filippo Della Valle. The charior is pulled by marine horses. who are in turn preceded by tritons. The marine divinities are placed on rocks of irregular blocks of travertine. The fountain sprawls below the facade of the palazzo behind it, which is in rigidly classicising Style, based on the triumphal arch model, with further sculptures in niches as well as in the attic storey and an elegant balustrade. The surrounding houses crowd round the splendid monument, giving the impression of an amphitheatre, while the noise of the fountain’s water can be heard From the maze of surrounding streets up to the moment when the snow-white scene appears miraculously before the astonished eyes of the visitor. The Trevi fountain VIDEO

Colosseo – Anfiteatro Flavio – Amphitheatrum Flavium – it was used for gladiatorial contests and public spectacles such as mock sea battles, animal hunts, executions, re-enactments of famous battles, and dramas based on Classical mythology. From the moment it was built, the grandeur of the Flavian Amphitheatre has conditioned Rome’s urban landscape and it still dominates the ancient centre. Its arcaded surface was chosen as the theatrical background to the Via dei Fori lmperiali. It was the first amphitheatre to be built in Rome in the form of a monument. In the Republican age the gladiatorial games took place in the Roman Forum, where temporary wooden structures were provided for the occasion. Vespasian, the founder of the Flavian dynasty, emerged victorious from the civil war which followed Nero’s death in 69 AD. As part of a coherent political scheme, the new Emperor decided to dedicate the huge urban spaces and works of art appropriated by Nero to the public, for their enjoyment.

– Basilica di Santa Sabina and Porta lignea di Santa Sabina
– The orange garden – Parco degli aranci and the romantic view of Rome in Vatican direction
– Rome rose garden – Giardino delle rose – Over 1100 varieties of roses are grown there, many of them gifts from countries around the world. 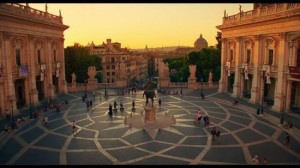 – Tempietto del Bramante – Tempietto di San Pietro in Montorio – 1502 Temple of Bramante is considered one of the first great building of the high Reinassence. Built on the top of the Gianicolo, the tempietto (little temple) was commissioned by the King of Spain to consecrate the place in which, according to medieval tradition, Saint Peter, the martyr, founder of the Christian Church and ﬂat pope, had been cruciﬁed. The young architeCt Bramante conceived it as a genuine martyrium in antique style. with a central plan and a circle of perimeter columns. The building must have been placed in a large square, which, however. was never built. In spite of the reduced size, the space has been planned in grandiose, monumental Style. It is evidently based on the study of the rules of harmony of the Roman Vitruvius, who advised the use of the Doric order of columns for buildings dedicated to masculine divinitics or mythological ﬁgures famous for their sum and courage. The architeCt Bramante did in Fact use the Doric order for the tempietto. giving it an air of rigour and economy, which is also due to limited use of excessive decoration and the sober harmony of the volumes.


– Fontana Paolina o Fontana dell’Acqua Paola – Il fontanone The big fountain – It was built in 1612 to mark the end of the Acqua Paola aqueduct, restored by Pope Paul V, and took its name from him. It was the first major fountain on the left bank of the River Tiber.

– San Peter square The open space which lies before the basilica was redesigned by Gian Lorenzo Bernini from 1656 to 1667, under the direction of Pope Alexander VII.
The colossal Tuscan colonnades, four columns deep, frame the trapezoidal entrance to the basilica and the massive elliptical area which precedes it.
At the center of the ovato tondo stands an Egyptian obelisk of red granite, 25.5 metres tall, supported on bronze lions and surmounted by the Chigi arms in bronze, in all 41 metres to the cross on its top. The obelisk was originally erected at Heliopolis, Egypt, by an unknown pharaoh. During the Middle Ages, the gilt ball on top of the obelisk was believed to contain the ashes of Julius Caesar.

The Lovely night in Rome with local guide 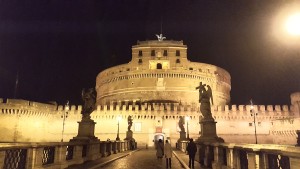 Now I leave this little hut,

Where my beloved lives,

Through the shadowy leaves.

Luna shines through bush and oak,

And the birch trees bowing low

Shed incense on her track.

How beautiful the coolness

Of this lovely summer night!

How the soul fills with happiness

In this true place of quiet!

I can scarcely grasp the bliss!

Yet, Heaven, I would shun

If my darling granted one. 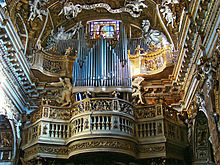 LUXURY TOURS OF ROME and AROUND ROME – RUSRIM.COM
Small group tours in minivans ensuring the highest level of comfort. Our vehicles are fully equipped with all the options required for  long trips, including air conditioning.
An English speaking private guide will be at your disposal for the whole day and will arrange the most satisfactory tour with you.